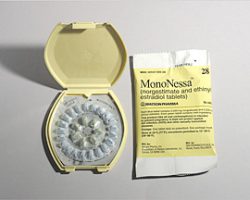 For oral administration. MonoNessa dosage regiment: 1 pill/day for 21 days containing hormones + 7 free of hormones pills. The interval between doses of the drug should not exceed 36 hours. Birth control pills are most effective if taken at the same time of the day, for example, in the morning.

It is contraindicated in smoking women especially if they are over 35 years old.

There may be an increase or decrease in body weight, breast tenderness, discharge from the nipples; nausea, vomiting; migraine, headache; depression; skin rash. If you find these symptoms, you should consult your doctor.

If you miss the habitual time of administration, MonoNessa pill should be taken immediately. The delay in the usual regimen up to 12 hours provides a reliable contraceptive effect. The effectiveness of the drug decreases with a delay in taking the tablet for more than 12 hours.

If the usual time of taking the drug is more than 12 hours or more than one pill is missed, the drug application should be immediately restored leaving a missing tablet in the package. However, before the end of this cycle, additional means of protection from pregnancy, such as a condom or vaginal contraceptive suppositories, should be used. In such situations, one cannot rely on the method of “safe days” or “temperature” method of contraception.

MonoNessa category in the FDA is X. The drug is contraindicated during pregnancy.

Epidemiological studies have not revealed an increase in the risk of birth defects in children whose mothers before the pregnancy have taken birth control pills. Most modern studies have also not revealed teratogenic effects, in particular, cardiac dysfunctions and shortening of limb, in children of women who mistakenly took oral contraceptives during pregnancy.

Combined oral contraceptives can affect lactation, that is, reduce the amount and change the composition of breast milk. In addition, a small portion of contraceptive steroids and/or their constituents can enter the breast milk. In connection with this, MonoNessa is contraindicated in the period of breastfeeding.