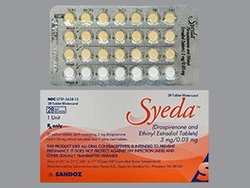 Syeda is intended for an oral administration as a contraceptive means.

Drospirenone, contained in this birth control, has an anti-aldosterone action and is capable to prevent weight gain and the appearance of other symptoms (eg, swelling) associated with the hormone-induced fluid retention. Drospirenone also has antiandrogenic activity and decreases the symptoms of acne, the skin and hair oiliness. This action of drospirenone is similar to the action of natural progestin the main secretion of the female body. This preparation should be taken especially by women with hormone-dependent fluid retention, as well as for women with acne and seborrhea.

Syeda contains 21 active pills and 7 placebo pills. The preparation is taken at one and the same time washed down with a full glass of water. When taking 7 placebo pills, the menstruation comes. Usually, it may last longer than 7 inert pills.

Syeda is contraindicated in the following health conditions:

If any of the above diseases or conditions develop for the first time on the background of taking this birth control drug, then it should be immediately withdrawn.

The following side effects caused by Syeda were described and their relationship with the drug was neither confirmed nor disproved:

Phenytoin, barbiturates, primidone, carbamazepine and rifampicin, topiramate, felbamate, griseofulvin increase the clearance of sex hormones, which can lead to breakthrough bleeding or a decrease in the contraceptive reliability. Maximum enzymatic induction usually does not occur within 2-3 weeks, but can then persist for at least 4 weeks after the drug therapy discontinuation.

Ampicillin and tetracycline reduce the reliability of the contraceptive effect. The mechanism of this action is not clearly understood.

If you simultaneously take the drugs listed above and within 7 days after their withdrawal, you must temporarily use the barrier method of contraception (for rifampicin – within 28 days after its withdrawal). If the concomitant drug use is initiated at the end of the oral contraceptive package, the next package should be started without an interruption in admission.

In women, receiving drugs that affect liver enzymes for a long period of time, it is necessary to consider the possibility of using other methods of contraception.

There is a theoretical possibility of increasing the concentration of serum K + in women receiving oral contraceptives simultaneously with other drugs that increase serum K + concentration: ACE inhibitors, angiotensin II receptor blockers, some anti-inflammatory drugs (eg indomethacin), potassium-sparing diuretics and antagonists of aldosterone. However, in a study evaluating the interaction of an ACE inhibitor with the drospirenone-estradiol combination realized in Syeda, in women with moderate arterial hypertension, there was no significant difference between serum K + concentrations in women receiving enalapril and placebo.

If the time of application is missed for less than 12 hours, the contraceptive effect is not reduced. A woman should take the pill as soon as possible, the next pill is taken at the common time.

If you miss a pill for more than 12 hours, contraceptive effect is considerably decreased. The more pills are missed, and the closer the missing to a 7-days break in taking pills, the greater the likelihood of pregnancy is.

The drug is not allowed during pregnancy and lactation.