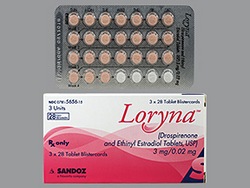 Loryna is a monophasic microdose birth control preparation containing drospirenone and ethinyl estradiol. The drug is produced to suppress an ovulation to prevent an unwanted pregnancy.

Loryna is recommended to protect against unwanted pregnancies in women of reproductive age with the following concomitant conditions:

As a hormone replacement therapy during postmenopause period, the substance is used according to the indications:

Loryna is a combined hormonal contraceptive with anti-aldosterone and antiandrogenic action.

The contraceptive effect of this medication is based on the interaction of various factors, the most important of which are suppression of ovulation and a change in the properties of the cervical secretion, due to which it becomes almost non-penetrable for spermatozoa.

When used correctly, Perl’s index (the number of pregnancies per 100 women per year) is less than 1. When missing tablets or improperly used, the Pearl index may increase.

In women taking Loryna, the menstrual cycle becomes more regular, less painful menstruation is observed less often, the intensity of bleeding decreases, which reduces the risk of anemia. In addition, according to epidemiological studies, the use of combined oral contraceptives reduces the risk of developing endometrial and ovarian cancer.

Drospirenone, contained in this birth control drug, has an anti-aldosterone effect. It prevents weight gain and the appearance of swelling associated with estrogen-induced fluid retention, which ensures a good drug tolerability. Drospirenone has a positive effect on premenstrual syndrome (PMS). The clinical effectiveness of Drospirenone + Ethinyl estradiol in alleviating severe PMS symptoms such as severe psychoemotional disorders, breast tenderness, headache, muscle and joint pain, weight gain and other symptoms associated with the menstrual cycle is observed.

Drospirenone also has antiandrogenic activity and helps to reduce acne, a fat content of the skin and hair. This action of drospirenone is similar to the action of natural progesterone, produced by the body.

In combination with ethinyl estradiol, drospirenone shows a beneficial effect on the lipid profile, characterized by an increase in HDL.

The appropriate dosage of Loryna (drospirenone/ethinylestradiol) will depend on the patient’s current health condition. You must strictly follow the prescribing doctor’s prescriptions to achieve the safest and effective results of taking the drug. As a rule, one Loryna pill is taken once a day and washed down with a full glass of water. It is recommended to take tablets at the same time daily to achieve the most optimal reception results.

Loryna should not be used in the presence of any of the conditions listed below:

If some of the mentioned above contraindications are observed the immediate withdrawal of this birth control drug is mandatory.

Some drugs (barbiturates, hydantoin derivatives, carbamazepine, oxcarbazepine, rifampicin, topiramate, griseofulvin, etc.) with a long-lasting use are capable to inhibit microsomal hepatic enzymes, which entails an increase in the sex hormones clearance and a decrease in the effectiveness. Therefore, during the period of these medications’ application, additional contraceptive measures should be taken.

Skipping placebo tablets can be neglected. Such pills may be thrown away. The following recommendations apply only to the skipping of active tablets of Loryna.

If the delay in taking the drug is less than 12 hours, the contraceptive protection is not decreased. A woman should take the missed tablet as soon as possible, and continue the application of the rest pills at the regular time.

If the delay in taking the pills is more than 12 hours, the contraceptive protection can be decreased. The higher the probability of pregnancy is increased because of the more pills are missed and the closer the skipped tablets to the phase of taking inactive tablets.

In this case, you can follow the 2 basic rules:

Loryna is contraindicated during pregnancy and lactation. It is better to exclude the application of combined hormonal contraceptives in the case of pregnancy and lactation. There is a risk of hormones penetration into breast milk. Though there were no developmental damages diagnosed in newborns it is better to stop taking Loryna as fast as possible.

Product
Tuesday, September 14, 2021
★☆☆☆☆
“ Doctor switched me to Loryna and that made me quit any BC in just a little over a week of starting it. I have never experienced any kind of stomach problems. I had some minor cramps but on loryna - from day one I felt bloated and gassy to a point I was not able to sit without having a sharp pain all over my lower stomach are. At first I really blamed my period but then I took one pill late and that helped me to notice that I was feeling fine before I took pill. Never again.”
- Anna