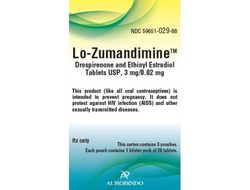 Lo-Zumandimine is a combination birth control pill which contains ethinyl estradiol and drospirenone, that are used to prevent unwanted pregnancy.

The contraceptive effect of Lo-Zumandimine is based on the interaction of various factors, the most important of which are inhibition of ovulation, an increase in the viscosity of the secretion of the cervix, as a result of which it becomes impenetrable for spermatozoa.

Tablets are taken orally, with a small amount of water.

Take 1 tablet per day, in the order indicated on the blister, starting with active tablets (21 tablets) and ending with inert tablets (7 tablets) preferably at the same time of day, continuously for 28 days. Expect menstrual-like bleeding at the time of taking inert tablets. It usually starts on day 2-3 after you have taken the last active tablet and may not end before you begin a new pack. Take the drug without any breaks.

If you have not taken any contraceptives in the previous month, start taking Lo-Zumandimine on the first day of menstrual bleeding. It is allowed to start taking the tablets on the day 2-5 of your menstrual cycle, but in this case, you should use an additional birth control method during the first seven days.

In some cases, Lo-Zumandimine can cause the following side effects:

The following side effects have been reported in women using birth control pills (rarely):

In women with hereditary angioedema, the contraceptive may cause or aggravate its symptoms.

Lo-Zumandimine is contraindicated for use in the following cases:

If any of the above diseases or conditions develop for the first time against the background of taking the contraceptive, Lo-Zumandimine should be immediately discontinued.

Avoid mixing Lo-Zumandimine tablets with the following drugs or combine them with caution:

The use of Lo-Zumandimine is contraindicated during pregnancy.

If pregnancy is detected during the use of birth control pills, they should be immediately discontinued. The data on the effects of drospirenone + ethinylestradiol on the fetus are limited. No significant epidemiological data are available.

The use of Lo-Zumandimine is contraindicated during breastfeeding. Birth control pills can reduce the amount of breast milk and change its composition. A small amount of sex hormones can be excreted in breast milk.

If you missed an inert tablet, just throw it away since it contains no hormones.

If you missed an active tablet and the delay is less than 12 hours, the contraceptive effect is not reduced. The tablet should be taken as soon as possible. Continue taking tablets according to your usual schedule.

If the delay in taking the next active pill is more than 12 hours, the contraceptive effect can be reduced. The more pills are missed in a row, the higher the probability of pregnancy. For such situations, the following recommendations may be given:

If you missed active tablets and had no menstrual-like bleeding while taking inactive tablets, you need to exclude pregnancy.

Before using this drug, you need to exclude pregnancy and undergo medical and gynecological examination. In case of prolonged use, preventive examinations should not be performed every 6 months.

This drug does not protect against HIV infection (AIDS) and other sexually transmitted diseases.

Women taking birth control pills have extremely rare cases of thrombosis and thromboembolism. The link with oral contraception is not proven.

An increased risk of thromboembolism in the postpartum period should be considered.

An increase in the frequency and severity of a migraine may be the reason for the immediate discontinuation of birth control pills.

In rare cases, the development of liver tumors was observed against the background of the use of Lo-Zumandimine. If you have severe pain in the abdominal region, enlargement of the liver or signs of intraabdominal bleeding, you need to consult a doctor.

The drug is well tolerated by patients with mild to moderate hepatic impairment,m as well as women with renal insufficiency of mild and moderate severity.

Recurrent cholestatic jaundice, which develops for the first time during pregnancy or during the previous intake of sex hormones, requires the withdrawal of birth control pills.

Women with hypertriglyceridemia or a predisposition to pancreatitis should take the contraceptive with caution.

Oral contraceptives may have an effect on insulin resistance and glucose tolerance. Women with diabetes should be carefully monitored while taking this drug.

The drug can affect the biochemical parameters of the liver, thyroid, adrenal and kidney functions, as well as the number of plasma transport proteins. Changes usually do not exceed the limits of normal values.

Drospirenone increases the concentration of renin and aldosterone of the blood plasma.

The drug may worsen the course of endogenous depression and epilepsy.

The use of Lo-Zumandimine can be especially useful for women with hormone-dependent fluid retention, acne and seborrhea.

The effectiveness of the medication can be reduced by missing tablets, vomiting and diarrhea, or as a result of drug interactions.

Irregular spotting can occur during the first months of contraception. If irregular bleeding recurs or develops after the previous regular cycles, a thorough examination should be conducted to exclude malignant neoplasms or pregnancy.

The contraceptive does not affect the ability to drive vehicles and work with mechanisms.

In severe gastrointestinal disorders, you need to use additional measures of contraception. If you had vomiting or diarrhea within 4 hours after taking an active tablet, you need to read the recommendations for missed tablets.