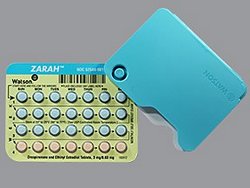 Zarah is a combination of two hormones, an estrogen (ethinyl estradiol) and a progestin (drospirenone), that are used to prevent pregnancy.

The combination of ethinyl estradiol and drospirenone provides reliable contraception (Pearl index 0.41-0.8) with the restoration of fertility after withdrawal, the stability of the menstrual period and antiproliferative effect on the endometrium in postmenopause.

Take 1 tablet daily at about the same time, with a small amount of water, in the order indicated on the blister pack. Tablets are taken continuously for 28 days. Start taking tablets from the next package after the last tablet from the previous package is used. The withdrawal bleeding usually begins on the 2nd-3rd day after the start of taking inert tablets (last 7 tablets) and does not necessarily end at the beginning of the next package.

Zarah birth control pills can cause the following side effects:

Contraindications for use of Zarah tablets include:

Some drugs (barbiturates, hydantoin derivatives, carbamazepine, oxcarbazepine, rifampicin, topiramate, griseofulvin, etc.) are able to induce microsomal enzymes of the liver, which entails an increase in the clearance of sex hormones and a decrease in the effectiveness of Zarah contraceptive. Therefore, during the period of taking these medicines, you need to use additional non-hormonal contraceptive methods.

Azole antimycotics, Ca-channel blockers, macrolides and grapefruit juice can increase the concentrations of progestin and estrogen. Drospirenone can reduce the effectiveness of anabolic steroids and stimulants of the smooth muscles of the uterus.

Zarah pills are contraindicated in pregnancy and lactation (breastfeeding).

Missing inert tablets (22-28) can be ignored. Nevertheless, you should throw them away to avoid an accidental prolonging the period of taking inactive tablets.

If you miss an active tablet, follow the below recommendations:

The benefits of hormonal contraception should be evaluated individually for each woman and discussed with a doctor before starting the treatment.

The use of any combination oral contraceptive increases the risk of venous thromboembolism. The risk of complications increases:

The presence of any of the above risk factors may be a contraindication.

Some epidemiological studies revealed an increased risk of cervical cancer in women who took combined oral contraceptives for more than 5 years.

In women with hypertriglyceridemia or a hereditary predisposition to this, the risk of pancreatitis with combined oral contraceptives may be increased.

Although a small increase in blood pressure was noted in many women who took combined oral contraceptives, clinically significant increases were rare. Only these rare cases required the immediate withdrawal of the drug.

The effectiveness of Zarah drug can be reduced in the following cases: when missing tablets, with vomiting and diarrhea or as a result of drug interactions.