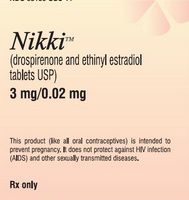 Nikki is a hormonal contraceptive based on drospirenone and ethinyl estradiol, that are used to prevent unwanted pregnancy on a daily basis.

The drug is used as an oral hormonal contraceptive.

In addition to a contraceptive effect, it has other properties. In particular, Nikki has an anti-androgenic effect, as a result, it has an effect in the case of androgenic alopecia, acne, seborrhea.

Ethinyl estradiol, which is part of the drug, can prevent the occurrence of osteoporosis, affecting osteoclasts. It also has a beneficial effect on the skin, slows the formation of wrinkles, reduces the concentration of glucose and insulin in the blood.

Drospirenone is a progestogen. It counteracts water retention in the body, and as a result, copes with arterial hypertension, weight gain, chest pain, edema.

This drug belongs to the group of oral contraceptive drugs, includes hormones of the sex glands, their estrogen-gestagenic fixed combinations.

This is a hormonal drug that contains ethinyl estradiol and drospirenone (an analogue of natural progestogen).

The contraceptive effect of this drug is based on the interaction of various properties of its constituent substances, the most important of which is the ability to inhibit ovulation and produce a qualitative effect on the endometrium of the uterus.

Nikki tablets are taken orally. Take 1 tablet per day, at the same time of a day. You should follow the sequence indicated on the reverse side of the blister.

Take tablets for 28 days in a row. Each next package is started the day after the previous one has ended.

Withdrawal bleeding, similar to menstrual bleeding, begins on the 2-3rd day after starting placebo pills and may not end when it’s time to start a new pack.

If an abortion is performed in the first trimester, the drug is started on the day of surgery.

If an abortion was performed in the second trimester of pregnancy or the woman wants to start taking an oral contraceptive after giving birth, the reception starts on the 21-28th day.

The contraceptive effect is not guaranteed in the first week of administration. Therefore, you should you should use backup methods of contraception for the first 7 days.

An overdose of Nikki drug has not yet been reported. Theoretically, an overdose of drospirenone and ethinyl estradiol can cause:

Treatment is symptomatic. The antidote has not yet been identified.

Nikki pills can cause the following side effects:

The following serious adverse events have been reported in women using combined oral contraceptives based on drospirenone and ethinyl estradiol:

Nikki cannot be used if the patient has an increased sensitivity (allergy) to one of the components of the drug.

In addition, this contraceptive should not be used in patients with:

The interaction of Nikki and other drugs can lead to breakthrough bleeding and / or a decrease in the effectiveness of the contraceptive.

There may be an interaction with drugs which induce microsomal enzymes (phenytoin, barbiturates, primidone, carbamazepine, rifampicin, oxcarbazepine, topiramate, felbamate, ritonavir, griseofulvin and medicines containing St. John’s wort (Hypericum perforatum), which can induce growth clearance of drospirenone and ethinyl estradiol. The maximum induction of enzymes is observed after 10 days and may persist for 4 weeks after cessation of therapy.

In the treatment of any of the above drugs, except rifampicin, a woman should temporarily use a backup birth control method in addition to taking combined oral contraceptive during treatment and 7 days after discontinuation.

Women who take rifampicin should use a barrier method of birth control during the entire period of treatment with rifampicin and for another 28 days after discontinuation.

Women who are treated with drugs that induce liver enzymes for a long time are recommended to use a non-hormonal method of contraception.

When treating with an antibiotic (with the exception of rifampicin and griseofulvin), a backup method of birth control should be used within 7 days after its cancellation. If a backup method still needs to be used, and the active tablets in Nikki pack have already ended, you should discard placebo tablets and start taking tablets from the next pack.

The major metabolites of drospirenone in plasma are formed without the participation of the cytochrome P450 system. Thus, it is unlikely that inhibitors of this enzyme system affect the metabolism of drospirenone.

Nikki is not prescribed during pregnancy. If pregnancy occurs when on the pills, contraception should be stopped immediately. Epidemiological studies did not reveal either an increased risk of birth defects in children born to women who took COCs before pregnancy nor the teratogenic effects of COCs if they were used during pregnancy.

The medication can reduce the amount or change the composition of breast milk. Therefore, the use of Nikki during breastfeeding is not recommended. A small amount of steroids contraceptives or their metabolites may be excreted in milk, which may affect the baby.

If you miss 1 active pill, take it as soon as possible and take the next pill at your usual time.

If you miss 2 active pills in week 1 or 2, take 2 pills as soon as possible and take 2 pills the next day. Then return to your usual schedule until you finish the pack. Use a backup method of birth control for 7 days.

If you miss any of the 7 placebo pills in week 4, discard them. Continue taking 1 pill per day until the packis empty.

Influence on the ability to drive vehicles or work with mechanisms has not been studied.

Nikki is not prescribed for children who do not have regular ovulatory cycles.

The medication does not protect against HIV infection (AIDS) and other sexually transmitted diseases.

The greatest risk of developing venous and arterial thrombosis and thromboembolism exists in the first year of taking the contraceptive (especially in the first 3 months) or when contraception is resumed after a 4-week break.

A woman should stop taking the pills and consult a doctor if she has the following symptoms: unilateral pain in the lower limbs and / or edema; sudden severe chest pain; with or without radiation in the left hand; sudden shortness of breath; sudden cough; any unusual, severe, prolonged headache; increased frequency and severity of migraine; sudden partial or complete loss of vision; diplopia; inarticulate speech or aphasia; dizziness; loss of consciousness or fainting with or without epileptic seizures; weakness or a very significant loss of sensitivity on one side or in one part of the body; movement disorders; ‘sharp’ belly.

The risk of thrombosis (venous and / or arterial) and thromboembolism increases: with age, among smokers (with an increase in the number of cigarettes smoked or with increasing age, the risk further increases, especially in women older than 35 years), with a family history or arterial thromboembolism ever in close relatives or parents at a relatively young age), obesity (body mass index of more than 30 kg / m2); dyslipoproteinemia, hypertension, valvular disease, atrial fibrillation; prolonged immobilization; temporary immobilization, including air travel for more than 4 hours; serious surgery; any operation on the lower limbs or extensive trauma – in these situations it is necessary to stop taking the tablets; in case of planned surgery – 4 weeks before it.

An increase in the frequency and severity of a migraine during the use of Nikki (which may precede cerebrovascular disorders) may be grounds for immediate discontinuation of these medicines.

Recurrent cholestatic jaundice, which develops for the first time during pregnancy or during the previous administration of sex hormones, requires discontinuation of the drug.

In women with hypertriglyceridemia or a family history, the risk of pancreatitis increases.

If a persistent, clinically significant increase in blood pressure develops while taking the tablets, it is necessary to cancel the drug and treat hypertension. Taking the pills can be resumed if normal blood pressure values are achieved with the help of antihypertensive therapy (after consulting a doctor).

Women with a tendency to chloasma should avoid prolonged exposure to the sun and exposure to ultraviolet radiation.

The drug can affect the biochemical indicators of liver function, thyroid, adrenal glands and kidneys, as well as the amount of plasma transport proteins such as lipid / lipoprotein fractions, carbohydrate metabolism, blood clotting and fibrinolysis. Changes usually do not go beyond the normal range.

COCs can worsen the course of endogenous depression and epilepsy.

Using Nikki for birth control can be especially useful for women with hormone-dependent fluid retention, as well as for women with acne and seborrhea.

Some women may not have ‘withdrawal’ bleeding when taking placebo pills. If the drug was taken in accordance with the instructions, then pregnancy is unlikely. However, if the tablets were taken irregularly or if withdrawal bleeding is absent 2 months in a row, then you need to exclude pregnancy before continuing hormonal contraception.