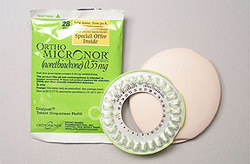 Ortho Micronor is a progesterone birth control pill containing norethisterone (also known as norethindrone) which is used to prevent pregnancy.

Ortho Micronor is used in the following conditions:

The active ingredient of the drug – norethisterone – is a gestagen type nosteroid, which exhibits the properties of weak gestagens.

In contrast to many progestational compounds, norethisterone has a pronounced anti-estrogenic character, and unlike other derivatives of nortestosterone in the body, only a small part of the compound is converted to estrogen.

According to clinical and pharmacological studies, norethisterone blocks the production of follicle-stimulating hormone (FSH) and the hormone of the yellow body (LH), reduces the synthesis of steroids by the yellow body.

Norethisterone, which has a mainly progestational effect, exhibits a significant antiestrogenic and minimal estrogenic and androgenic effect. The drug can be widely used in the field of obstetrics and gynecology.

Take one pill orally from the first day of the menstrual period at the same time of a day. In the first 14 days, additional contraceptive methods should be used.

Vomiting or diarrhea can lead to withdrawal of the drug from the body, so in those cases where these symptoms occur within 1 day, the pill must be taken again. If these symptoms persist for a longer time, you should temporarily resort to other methods of preventing pregnancy.

In rare cases Ortho Micronor causes the following side effects:

Do not use the drug if you have any of the following conditions:

It is not recommended to combine the contraceptive with barbiturates, phenytoin, rifampicin, cimetidine and other drugs that affect microsomal oxidation in the liver

If a patient missed a norethisterone pill of, the missed pill should be taken as soon as possible, in which case additional methods of contraception should be used.

The drug is contraindicated in pregnancy and breastfeeding. If you become pregnant, Ortho Micronor should be discontinued immediately. With the occasional use of the birth control pills in the early period of pregnancy, norethisterone did not have a teratogenic effect, including developmental disorders of the limbs and heart.

The drug causes virilization of the female fetus in monkeys and rats. In high doses, norethisterone can cause the death of the embryo. The use of the medication in the puerperium reduces the secretion of milk and changes its quality. Breastfeeding should be stopped during therapy with this contraceptive.

The drug does not affect the ability to drive a car and operate machines.

Before using Ortho Micronor, it is necessary to exclude the presence of malignant neoplasms, to conduct preliminary careful gynecological, oncological examination and examination of the mammary glands.

Long-term treatment requires caution. If a patient has heart disease, kidney disease, bronchial asthma, epilepsy, a predisposition to thrombosis, hepatitis or liver function disorders, the preparation is prescribed only on an individual basis.

If you are breastfeeding, inform your doctor about it and ask for advice before starting treatment.

If you have any of the following conditions, you need to consult a doctor for him to determine the advantage and risk of initiating or continuing the use of the medicinal product. The doctor will also determine whether there is a need for your close monitoring: