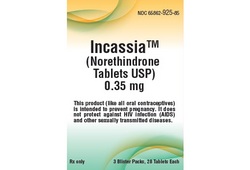 Incassia is a progestin-only contraceptive which contains norethisterone (norethindrone), which is used to prevent pregnancy.

Norethindrone prevents pregnancy by making vaginal fluid thicker, preventing fertilization and changing the lining of the uterus. As a result, the attachment of a fertilized egg does not occur. The drug also stops ovulation in about half of a woman’s menstrual cycles.

Take the tablets orally as directed by your doctor (usually 1 tablet per day) at the same time each day (preferably at bedtime).

Begin taking the tablets on the first day of your menstrual period. If you begin taking them on another day, you should use additional non-hormonal birth control methods for the first 2 days.

After taking the last tablet, start a new pack without interruption. The package does not contain any tablets (without hormones). You may also have spotting between menstrual periods. In this case, you should not stop taking the drug.

In some cases, Incassia tablets can cause the following side effects:

Norethisterone can interact with some drugs, so it’s recommended to avoid the use of Incassia with the following drugs:

Incassia tablets are contraindicated in pregnancy and lactation. If you get pregnant, stop taking birth control pills immediately. The use of the drug during breastfeeding reduces the secretion of milk and changes its quality. Breastfeeding should be stopped if you decide to take norethisterone tablets.

In case of prolonged treatment, you need to undergo a gynecological examination every 6 months.

Prolonged therapy with Incassia (more than 1 year) increases the risk of hyperplasia and endometrial cancer.

If you have an irregular bleeding during the use of birth control pills, a histological examination of the endometrial smear should be performed. If intermenstrual bleeding persists for more than 3 months, diagnostic scraping should be performed to exclude malignant neoplasms of the uterus.

Long-term use of norethisterone tablets (5 years or more) may increase the risk of breast cancer in women who are in menopause.

The drug may aggravate the symptoms of endometriosis.

Patients with cardiovascular diseases or impaired renal function should be carefully monitored since the drug contributes to the retention of water and sodium in the body.

Patients with diabetes taking Incassia require careful monitoring because of a possible decrease in glucose tolerance.

The use of norethisterone increases the risk of gallbladder disease.

Norethisterone can affect the results of certain laboratory parameters: the functions of the liver, kidneys, adrenals, thyroid gland.