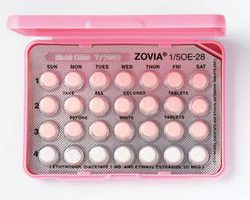 Zovia 1/50E is a monophasic birth control preparation containing ethynodiol diacetate and ethinyl estradiol. The main aim of this preparation is to suppress the ovulation.

Zovia 1/50E is prescribed for contraceptive aims. It may be also used alternatively as an acne treatment or menstrual cycle regulation.

This birth control drug is a combined steroid contraceptive. It acts on the female reproductive system, suppressing ovulation and preventing conception. Synthetic steroids, which are part of the drug, interrupt the rhythmic cyclic activity of the pituitary gland. Mature eggs are not formed in the ovaries. The drug helps increase the production of viscous cervical mucus, which makes it difficult to penetrate the spermatozoa into the uterine cavity, thus preventing the fertilized egg implantation.

Zovia 1/50E is taken on the first Sunday after the beginning of the menstrual cycle. If the menstrual begins on Sunday, then a woman should take the drug on the same day. The tablets’ application should be started with the pill, located in the first row and corresponding to the Sunday. Continue reception at the same time each day for the next 21 days. Most likely, that the menstruation in the patient using the tablets will occur every 28 days and its beginning will coincide with the reception of blue placebo tablets.

There are special instructions which should be followed by everywomann having any kind of contraindications.

Due to the fact that contraceptive effect is fully manifested by the 14th day from the beginning of birth control preparation application, in the first 2 weeks, it is recommended to additionally use non-hormonal methods of contraception, or example, barrier ones. It does not affect the course of puberty during the formation of a normal menstrual cycle (the drug can be used by teenage girls and young women).

Prior to the beginning and every 6 months of drug use, a general medical and gynecological examination (including breast exams) is recommended. The drug should be discontinued immediately after pregnancy, the development of migraine headaches (if they were not previously diagnosed), the appearance of early signs of phlebitis or phlebothrombosis (unusual pain or bloating of the veins on the legs), jaundice, visual impairment, cerebrovascular disorders, stitching pains of unclear etiology when breathing or coughing, pain and a feeling of chest tightness, increased blood pressure, and also 3 months before the planned pregnancy and 6 weeks before the planned surgical intervention.

When diarrhea, vomiting occur, contraceptive effect is reduced (without withdrawing the drug, it is necessary to use additional non-hormonal methods of contraception).

Smokers who take hormonal contraceptive drugs have an increased risk of developing vascular diseases with serious consequences (myocardial infarction, stroke). The risk increases with age and depending on the number of cigarettes smoked (especially in women over 35 years of age).

The drug effectiveness is reduced if it is missed, diarrhea and/or vomiting are observed.

Side effects caused by Zovia 1/50E are observed very rare.

The following symptoms may be manifested themselves:

This drug reduces the effectiveness of:

The likelihood of an unwanted pregnancy is minimal if you missed taking 1 pill, but the drug effectiveness may decrease gradually if you miss it. If the tablet has not been taken, you should take 2 tablets the next day. If you missed taking 2 tablets for 2 consecutive days, in this case, you should take 2 tablets a day for 2 days. Then, the pills are continued being taking in a usual manner, but additional non-hormonal contraceptive methods (barrier methods: condom, chemical spermicides) need to be used for the next 14 days or until another menstrual bleeding occurs.

After a long interval or when switching from another medication take place, the first pill should be taken on the first day of the menstrual cycle and taken further for 21 days, after which 7 inert pills should be taken. In the treatment of gynecological diseases, the dose is established in each case individually, depending on the indications.

The drug should be discontinued immediately after the onset of pregnancy. When breastfeeding it is better to stop taking the medication. If the medication has already been taken, breastfeeding should be delayed for 24 hours. If a woman took the drug in the early pregnancy stages, no defects and deviations of the newborns were found by various clinical trials.