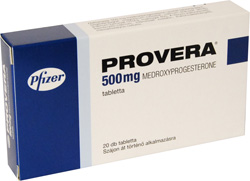 Medroxyprogesterone is a gestagen, which has a long-term effect and does not have androgenic and estrogenic activity. The drug suppresses the secretion of pituitary gonadotropins (especially LH), resulting in the prevention of follicular maturation in women and prolonged anovulation. It also reduces vasomotor symptoms in menopause, inhibits secretory changes in the endometrium, increases the viscosity of cervical mucus, increases the number of intermediate cells in the index of maturation of the vaginal epithelium, does not affect lactation.

In men, gestagens inhibit the production of testosterone.

When taken for contraception, reduces the risk of inflammatory diseases of the genitals, candidiasis vulvovaginitis.

With a parenteral administration in high doses, the drug has an antitumor effect on hormone-sensitive neoplasms. The antitumor effect is determined by a complex effect on the pituitary gland, estrogen receptors and the metabolism of steroid hormones at the tissue level.

In breast cancer, there is a correlation between the effectiveness of therapy and the concentration of estrogen and progesterone receptors in the tumor tissue.

In large doses, the medicine has GCS-activity.

Use the drug with caution: