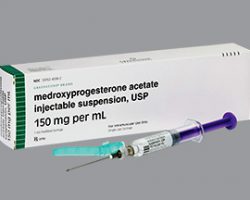 Medroxyprogesterone is a progestin, a female hormone that helps regulate ovulation and menstrual periods.

Medroxyprogesterone dose is determined individually. It depends on the indications, the dosage form of the drug, the treatment regimen used for the particular patient. It is necessary to strictly observe the compliance of a certain drug form with indications for use.

The drug is used orally or intramuscularly.

The use of very high doses of medroxyprogesterone can cause a number of symptoms, including an increase in body weight (with some fluid retention), increased fatigue. In cases of overdose, discontinue using the drug. Specific treatment is not required.

Do not use medroxyprogesterone pills or suspension in the following cases:

Before using the drug for the treatment of gynecological diseases and contraception, it is necessary to exclude the presence of a tumor of genital organs or mammary glands in the patient. If you undergo a pathohistological examination of certain organs and tissues, it is necessary to warn the histologist about the previous treatment with progestins.

Aminoglutethimide reduces the plasma concentration of medroxyprogesterone acetate, which can lead to a decrease in its effectiveness.

Medroxyprogesterone is contraindicated in pregnancy and breastfeeding (it is necessary to stop). In some cases, there is a connection between the developmental disorders of the genitals in the fetus and the intrauterine exposure of progestogens in the first trimester of pregnancy. Newborns, with an unplanned pregnancy that occurred within 1 to 2 months after the administration of medroxyprogesterone, have a high risk of developing hypotrophy, which increases the possibility of neonatal and intrapartum mortality. If pregnancy occurred in the background of using medroxyprogesterone, the patient should be warned about the possible risk to the fetus.

The drug is used strictly according to prescription and under the supervision of a doctor.

With dysfunctional uterine bleeding, it is necessary to exclude uterine cancer and other organic lesions.

Care should be taken in the treatment of patients whose condition may be adversely affected by fluid retention in the body.

A doctor should carefully monitor the condition of patients who were previously treated for depression and are currently taking medroxyprogesterone.

When treating patients with diabetes mellitus, medroxyprogesterone is able to reduce glucose tolerance should be considered.

If the cytological or histological examination of the endometrium or cervix is performed against the background of the treatment, the pathologist should be warned about the therapy.

With sudden partial or complete loss of vision, or with the sudden development of exophthalmos, double vision, migraine attacks, the drug should be stopped immediately.

Although there has been no causal relationship between the use of medroxyprogesterone and the development of thromboembolic disorders in patients with these abnormalities in the history or when they occur against the background of treatment, the possible risk and benefit should be carefully assessed when initiating or deciding whether to continue treatment.

The use of medroxyprogesterone as a contraceptive intramuscularly at a dose of 150 mg once in 3 months in adult women of childbearing age and in adolescent girls leads to a decrease in PCT of the lumbar bones for 5 years on average by 5.4% and 4.2%, respectively. During the first 2 years after the cancellation of the drug, bone tissue is partially restored. The greatest decrease in PCT is observed in the first 2 years of using the hormonal preparation.

All patients who use medroxyprogesterone are recommended to take calcium and vitamin D preparations.

When conducting laboratory studies, it should be noted that the use of medroxyprogesterone can reduce the levels of the following endocrine biomarkers: steroids in blood plasma and urine (cortisol, estrogens, pregnanediol, progesterone, testosterone); gonadotropins in blood plasma and in urine (LH and FSH); specific globulin that binds sex hormones.

When conducting the metapyrone test, bear in mind that high doses of medroxyprogesterone used in oncology can cause partial adrenal insufficiency (a decrease in the response of the pituitary-adrenal system), so before the introduction of the metapyron, it is necessary to check the ability of the adrenal cortex to respond to ACTH.