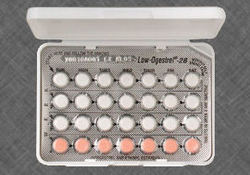 Taking birth control pills for 3 consecutive months and more contributes to the normalization of the menstrual cycle, reducing the pain of menstruation and reducing the amount of blood loss during menstruation. Besides the drug reduces the risk of developing mastopathy, endometriosis, ovarian cancer, uterine cancer and some other gynecological diseases.

Start taking tablets on the first day of your period (the first day of menstruation). Take one tablet a day, at about the same time, regardless of food intake, for 28 days in a row. During the use of the last seven tablets, you will have menstrual bleeding. Once you have taken the last tablet from the blister, start a new package, without interruption.

The contraceptive effect of the preparation occurs immediately if you started to take tablets on the first day of menstruation. In this case, you may not use additional birth control methods.

If you took the first tablet of the drug on day 2-5 of your period, you need to use condoms for 7 days.

If you took other hormonal contraceptives (without omissions and without factors that reduce the effect of the drug) in the previous month, then the contraceptive effect of Ethinyl Estradiol / Norgestrel persists in the break between packages, and you do not need to use additional methods of contraception.

If you missed previous oral contraceptives or the effect of the pills could be lowered for other reasons (diarrhea, vomiting, large amounts of alcohol, taking other medications), you need to use condoms for 7 days.

In order to get the most reliable contraceptive effect, read the following advice of gynecologists:

Like all medicines, Ethinyl Estradiol / Norgestrel can cause side effects. They may include:

It is not recommended to start taking Ethinyl Estradiol / Norgestrel tablets if you have any of the conditions listed below. If any of these conditions occur during the use of birth control pills, they should be discontinued immediately.

If you are taking or have recently taken any medications, inform your doctor or pharmacist.

Some medicines may affect the efficacy of birth control pills. The doctor will decide whether you should use additional contraception and for how long.

The medicines that can reduce the contraceptive effect of Ethinyl Estradiol / Norgestrel tablets include:

During the use of these medicines and for 7 days after the end of their admission, you need to use an additional method of contraception, for example, condoms. The doctor may advise you to use additional birth control pills for a longer period.

Ethinyl Estradiol / Norgestrel can reduce the effectiveness of other medicines, for example, cyclosporine, lamotrigine, so in such cases, it is necessary to consult a doctor.

The drug is not prescribed during pregnancy or lactation (breastfeeding).

Large-scale epidemiological studies of steroid hormones used for contraception did not reveal an increased risk of developing birth defects in children born to women who used hormonal tablets before pregnancy or in the early stages of pregnancy.

A small amount of sex hormones can be excreted in the mother’s milk.

If you forget to take a tablet, count how many hours have passed since the last pill was taken.

If the delay is less than 36 hours, the contraceptive effect will not decrease. Take the missed tablet as soon as possible and continue to take the tablets in the usual order.

If the delay is more than 36 hours, the contraceptive effect may decrease. In this case, your further actions depend on the number of the missed tablet:

When missing 2 tablets in a row, the contraceptive effect may be reduced. To avoid unwanted pregnancy, you should follow the instructions:

If you are not sure how to act in your situation, use additional contraceptives (condoms) until you consult a gynecologist.

Some factors may increase the risk of thrombosis. These include:

When taking Ethinyl Estradiol / Norgestrel, you may have spotting of varying degrees of abundance (scanty spotting or discharge, similar to menstruation). Especially often, bloody discharge occurs in the first 3 months of taking the drug. As a rule, such spotting is not dangerous, does not indicate pregnancy and does not require an urgent visit to a doctor. Despite these discharges, continue taking birth control pills as usual. Do not stop taking the pills without consulting a doctor, as this may increase bleeding. If you did not have missed active pills, the contraceptive effect persists despite these spotting, so you can continue to have sex without fear of becoming pregnant.

If spotting occurs as a result of skipping one or more active tablets, continue taking the drug despite these discharges. Use additional contraception, because missing tablets can reduce the contraceptive effect of the preparation.

During the use of tablets, menstrual bleeding may not come in a 7-day break. As a rule, this is not dangerous but requires special attention.

If you become pregnant when taking birth control pills, stop taking them immediately and contact your gynecologist.

The effectiveness of contraception can be reduced in the following cases:

If you suspect that the contraceptive effect of the drug could be reduced, use additional contraceptives (condoms) within the next 7 days.

Some studies have revealed that prolonged intake of birth control pills containing ethinyl estradiol and norgestrel increases the risk of developing cervical cancer. But with the same share of probability, cervical cancer can be a consequence of sexual behavior or other causes.

If you want to get pregnant, start taking folic acid for 3 months before planning a pregnancy.

If any of the following symptoms occur while taking Ethinyl Estradiol / Norgestrel pills, stop taking them and consult a doctor immediately. In the meantime, use an additional non-hormonal method of contraception, for example, condoms:

If you notice any unusual effects not listed in this manual, consult your doctor.