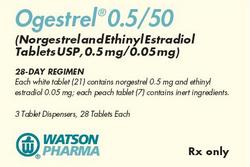 Ogestrel 0.5/50 is a birth control pill containing norgestrel and ethinyl estradiol, which is used to prevent pregnancy.

Ogestrel 0.5/50 contains two types of hormones: estrogen (ethinyl estradiol) and progesterone (norgestrel). These hormones prevent the production of ovaries every month (ovulation). They also thicken the mucus in the cervix, making it harder for sperm to reach the egg, and they change the functional layer of the uterus, reducing the chance that it will be able to accept the egg.

Tablets are taken orally, without chewing and with a small amount of liquid.

If you did not use hormonal contraception during the previous menstrual cycle, then the drug is taken from the 1st day of menstruation, 1 tablet per day for 28 days in a row, at the same time of day. Menstrual-like bleeding occurs in the period of taking 7 inert tablets. The next 28-day cycle of taking pills from a new package containing 28 pills should be started the next day after you take the last inert pill, even if the bleeding has not stopped. Thus, you start taking pills from each new package on the same day of the week.

When switching to Ogestrel 0.5/50 from another oral contraceptive, a similar scheme is used. The drug is taken as long as the need for contraception remains.

After an abortion, you should start taking birth control pills on the day of the abortion or the day after the operation.

After delivery, the drug can be prescribed only to women who are not breastfeeding. It’s allowed to start taking contraceptive on the 1st day of menstruation. During lactation, the use of the drug is contraindicated.

At the moment, no cases of overdose have been reported. In the case of taking an excessive dose of norgestrel and ethinyl estradiol, patients may experience a headache, nausea, vomiting, pain in the epigastric region and vaginal bleeding.

There is no specific antidote. In case of overdose, a patient needs to stop taking the drug and undergo a gastric lavage. If necessary, a patient receives a symptomatic therapy.

The drug is usually well tolerated.

Ogestrel 0.5/50 is contraindicated in the presence of the following diseases/conditions:

Ogestrel 0.5/50g is contraindicated for use during pregnancy. Before starting the drug, you should exclude pregnancy. You should stop taking the drug 3 months before the planned pregnancy, during this period you should use a non-hormonal method of birth control.

Combination oral contraceptives are not used during breastfeeding, as its active ingredients are excreted in breast milk. The use of the drug is possible only if the woman does not breastfeed, and she already had menstruation after childbirth.

The missed pill should be taken within the next 12 hours. If the delay is over 36 hours, then contraception is unreliable. In order to avoid intermenstrual bleeding, discard the missed pills and continue taking the drug. In the case of missed pills, it is recommended to use an additional method of contraception (for example, a condom).

Before starting hormonal contraception and every 6 months thereafter, a general medical and gynecological examination is recommended, including a cytological analysis of a smear from the cervix, assessment of the mammary glands, determination of blood glucose, cholesterol and other indicators of liver function, blood pressure control, urinalysis.

Use of Ogestrel 0.5/50 in women with thromboembolic diseases at a young age and increased blood clotting in a family history is not recommended.

The use of oral contraception is allowed no earlier than 6 months after the transferred viral hepatitis, provided that the liver function is normalized.

If you suspect a liver dysfunction when taking Ogestrel 0.5/50, consultation of the therapist is necessary.

In the case of vomiting or diarrhea, the drug should be continued. In addition, a patient should use a different, non-hormonal method of contraception.

Smoking women who take combination oral contraceptives have an increased risk of developing cardiovascular diseases with serious consequences (myocardial infarction, stroke). The risk increases with age and depending on the number of cigarettes smoked (especially in women older than 35 years).

The drug should be canceled in the following cases:

The preparation does not affect the ability to drive vehicles and work with mechanisms.