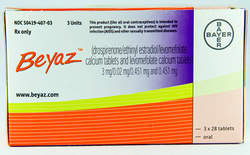 The contraceptive effect of the preparation is mainly carried out by suppressing ovulation and increasing the viscosity of the secretion of the cervix.
In women taking combined oral contraceptives, the periods become more regular, the soreness, intensity and duration of menstrual bleeding decrease. There is also evidence of a reduced risk of endometrial and ovarian cancer.

Drospirenone, which is part of Beyaz tablets, has antimineralocorticoid activity and helps prevent hormone-dependent fluid retention, which can reduce body weight and the likelihood of peripheral edema. Drospirenone also has anti-androgenic activity and helps to reduce acne, oiliness of the skin and hair (seborrhea).

Take tablets daily in the order presented on the package, at the same time of a day, without chewing, with a small amount of water. Take 1 tablet/day continuously for 28 days. Begin using tablets from the next package immediately after you have taken the last pill from the previous package. Bleeding cancellation usually is expected 2-3 days after the start of taking hormone-free tablets and may not be completed before taking the tablets from the next package.

If you have not used any hormonal contraceptives in the previous month:

Begin taking tablets on the 1st day of the period (on the 1st day of menstruation). On this day, it is necessary to take one pink (hormone-active) tablet, which is marked with the corresponding day of the week. Then take the pill in order. The drug starts to act immediately, so there is no need for additional barrier methods of contraception.

It is allowed to start taking the contraceptive on the 2nd-5th day of the menstrual period, but in this case, it is necessary to use an additional barrier method of contraception (for example, a condom) during the first 7 days of taking tablets from the first package.

When switching from other COCs, vaginal rings or contraceptive patches:

It is preferable to start taking Beyaz on the day after taking the last active hormone-containing tablet from the package of the previous birth control pills, but in no case later than the day after the usual 7-day break (for preparations containing 21 tablets) or after taking the last tablet that does not contain hormones (for preparations containing 28 tablets in a package). The preparation should be started as soon as the vaginal ring or patch are removed.

When switching from gestagen-only birth control means (“mini-pills”, injectable forms, implant), or from the intrauterine therapeutic system with the release of the progestogen:

You can switch from mini-pills to Beyaz any day, from an gestagen implant or IUD – as soon as they are removed, from the injection contraceptive – the day the next injection is to be made. In all cases, an additional contraception (a condom) must be used during the first 7 days of taking Beyaz pills.

After abortion (including spontaneous) in the first trimester of pregnancy:

You can start taking the drug immediately. In this case, additional contraceptive measures are not required.

After childbirth (in the absence of breastfeeding) or abortion (including spontaneous) in the II trimester of pregnancy:

It is recommended to start taking the drug on the 21-28th day after childbirth or abortion (including spontaneous) in the second trimester of pregnancy. If the drug is started later, it is necessary to use additional contraception during the first 7 days of taking the tablets. However, if sexual intercourse has occurred, pregnancy should be excluded before the drug is taken.

Rules for handling the packaging of Beyaz:

A blister pack contains 24 pink tablets and 4 auxiliary (light orange) tablets (the bottom row). The package also contains a sticker unit consisting of 7 self-adhesive strips with the names of the days of the week marked on them, necessary for the registration of the reception calendar. It is necessary to choose a strip with the first day of the week in which you start taking the tablets. For example, if you start taking pills on Wednesday, you should use a strip that starts with “Wed.” The strip is glued along the top of the package so that the designation of the first day is above the tablet on which the arrow with the inscription “Start” is directed. Thus, you will see on which day of the week you should take each pill.

In severe gastrointestinal disorders, absorption of the drug may be incomplete, therefore additional contraceptive measures should be taken.

If vomiting or diarrhea occurs within 3-4 hours after taking a pink (active) pill, you should be guided by recommendations when skipping tablets.

No cases of Beyaz overdose were reported.

Calcium levomefolate and its metabolites are identical to folates, which are part of natural products, daily consumption of which does not harm the body. The intake of calcium levomefolate in a dose of 17 mg/day (a dose 37 times higher than that contained in 1 tablet of Beyaz) for up to 12 weeks was well tolerated.

Potential risk and the expected use of birth control pills in each individual case should be assessed in the presence of the following diseases/conditions and risk factors:

Other possible side effects include:

Beyaz can interact with the following drugs:

If you combine Beyaz pills with the above-mentioned drugs, you should use additional methods of contraception during their simultaneous use and 7 days after it.

Missing hormone-free light-orange tablets can be ignored. However, the missed tablets should be discarded so as not to accidentally prolong the period of taking inactive pills. The following recommendations apply only to the omission of active pink tablets (tablets 1-24 in the package).

If the delay in taking any pink (active) pill is less than 24 hours, the contraceptive effect does not decrease. A woman should take the missed tablet as soon as possible and take the next pill at the usual time.

If the delay in taking any pink (active) pill is more than 24 hours, the contraceptive effect can be reduced. The more pills are missed and the closer the tablets pass to the phase of taking light orange (hormone-free) tablets, the higher the probability of pregnancy.

In this case, it is necessary to remember:

Accordingly, if the delay in taking pink (active) tablets is more than 24 hours, you can do the following:

A woman should take the last missed tablet immediately, as soon as she remembers it, even if it means taking two pills at the same time. The following tablets should be taken at the usual time. In addition, during the next 7 days, an additional contraception should be used. If sexual intercourse has occurred within 7 days before missing the pill, you should consider the possibility of pregnancy.

A woman should take the last missed tablet immediately, as soon as she remembers it, even if it means taking two pills at the same time. The following tablets should be taken at the usual time.

The contraceptive effect is reduced due to the approaching phase of taking hormone-free tablets. In this case, you must adhere to the following algorithms:

If you miss a pink (active) tablets and during the use of light orange (inert) pills bleeding cancellation does not occur, you need to make sure that you are not pregnant.

It is allowed to take no more than two pills per day.

The drug is contraindicated in pregnancy. If pregnancy has occurred during the use of the drug, the treatment should be immediately discontinued. The available data on the use of Beyaz during pregnancy are limited and do not allow any conclusions about the negative effect of the drug on pregnancy, the health of the fetus and the newborn baby. At the same time, extensive epidemiological studies have not revealed an increased risk of developmental defects in children born to women taking COCs prior to pregnancy, or teratogenicity in cases of COCs due to negligence in the early stages of pregnancy. There were no specific epidemiological studies for the drug.

The risk of developing thrombosis (venous and/or arterial) and thromboembolism or cerebrovascular disorders is increased:

An increase in the frequency and severity of a migraine during the use of Beyaz drug (which may precede cerebrovascular disorders) is the basis for immediate withdrawal of the drug.

Use in violations of liver function:

The drug is contraindicated in women with severe impairment of kidney function and with acute renal failure.

Use in violations of kidney function:

The drug is contraindicated for use in women with hepatic insufficiency and severe liver disease; liver tumors (benign or malignant).

With caution – liver disease, not related to contraindications.

The effectiveness and safety of Beyaz as a contraceptive was studied in women of reproductive age. The use of the drug in children and adolescents is contraindicated before the establishment of regular menstrual periods.

Use in old age:

Beyaz is not used after menopause.