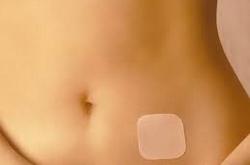 Ethinyl Estradiol / Norelgestromin is a contraceptive skin patch which is used to prevent pregnancy.

Ethinyl Estradiol / Norelgestromin is a transdermal delivery system (TDS), which delivers hormones to the dermis and hypodermis, that enter the body through the bloodstream. Delivered hormones cause changes in the body, preventing pregnancy. The active substances of the patch depress the pituitary activity in the synthesis of gonadotropic hormones. The drug prevents the follicle from ripening and ovulation does not occur. The drug creates an artificial temporary anovulatory infertility. In addition, the drug causes thickening of the cervical mucus, which worsens the penetration of spermatozoa into the uterus. In addition, the hormones cause changes in the endometrium, and it becomes immune to blastocyst transplantation. Contraception with the help of the transdermal system is characterized by high reliability (99.4%).

Ethinyl Estradiol / Norelgestromin is a patch that contains 6 mg of norelgestromin and 600 mcg of ethinyl estradiol. The patch is glued to the skin according to the instructions on the first day of menstruation and is changed every week. Do not use a patch from the 22nd to the 28th day of your period. Use a new patch with the first day of your next menstruation. The use of this drug requires consultation and supervision of a doctor.

In order to postpone menstruation for one period, a woman should stick a new plaster with the drug at the beginning of the 4th week (22nd day), thus missing the period free from the use of the contraceptive. Intermenstrual bleeding or spotting may occur. After 6 consecutive weeks of using the patch, you should be a 7-day interval. After the end of this interval, regular use of the drug is resumed.

If a woman wants to change the “change day” at the appointed day (during the week, free from the application), she must complete the current period by removing the third plaster with the drug. A woman can choose a new “change day” by gluing the first strip of the drug of the next period on the selected day. Period without using the drug, in no case should exceed 7 days. The shorter this period, the higher the probability that a woman will not have another menstrual period, and during the next contraceptive period, intermenstrual bleeding or spotting may occur.

Ethinyl Estradiol / Norelgestromin transdermal system is contraindicated in the following conditions (present or in the anamnesis):

Do not apply the patch to the mammary glands, hyperemic or damaged skin.

Medicines or herbal products that can reduce the effectiveness of Ethinyl Estradiol / Norelgestromin:

Some drugs and grapefruit juice can increase the level of ethinyl estradiol in blood plasma, provided they are co-administered. These include:

Ethinyl estradiol/norelgestromin can increase the levels of the following drugs in blood plasma:

The transdermal patch can reduce the level of the following drugs in plasma:

Ethinyl Estradiol / Norelgestromin TDS is contraindicated during pregnancy and breastfeeding.

What to do if the contraceptive patch falls off?

If Ethinyl Estradiol / Norelgestromin transdermal patch has completely or partially fallen off, then an insufficient amount of its active ingredients is supplied to the blood.

Even with a partial falling off of the transdermal patch:

Additional methods of contraception should be used only in the first 7 days of a new period. Do not try to glue the transdermal patch again if it has lost its adhesive properties; instead, you need to immediately glue a new transdermal delivery system. Do not use additional adhesive tapes or bandages in place the patch.

What if I miss a “change day”?

At the beginning of any contraceptive period (1st week / 1st day):

In women with a body weight of more than 90 kg, the contraceptive effect of Ethinyl Estradiol / Norelgestromin patch may be reduced.

There is no clinical evidence that the transdermal delivery system is safer than oral contraceptives.

Before starting or resuming the use of the transdermal therapeutic system, it is necessary to collect a detailed medical history (including a family history) and to exclude pregnancy. It is necessary to measure blood pressure and conduct a physical examination taking into account contraindications and warnings.

If you suspect a hereditary predisposition to venous thromboembolism, you should get advice from a specialist before deciding whether to use hormonal contraception.

In women with hypertriglyceridemia or this disease in a family history, the risk of pancreatitis may be increased.

Ethinyl Estradiol / Norelgestromin does not protect against HIV infection (AIDS) and other sexually transmitted diseases.

Influence on the ability to driving motor transport and management of mechanisms is not revealed.