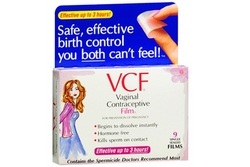 VCF Vaginal Contraceptive is a soluble film that turns into a spermicidal gel after it is inserted into the vagina. The drug is used to prevent pregnancy.

Spermicides contained in the drug paralyze the sperm, destroy its cellular membranes, making fertilization of the egg impossible. Destruction of spermatozoa occurs very quickly- in just 1 minute. In addition to the contraceptive effect, VCF Vaginal Contraceptive also has a bactericidal effect – the active substance nonoxynol 9 neutralizes most of the bacteria that are sexually transmitted.

One thin film is inserted into the vagina just before the sexual intercourse:

The birth control film can be used with a condom.

In rare cases, the spermicidal film can cause adverse reactions:

All unpleasant sensations are reversible and disappear after a short time.

Other intravaginal drugs can reduce the spermicidal activity of the contraceptive film.

Incorrect use of spermicides can lead to unwanted pregnancy.

The drug is contraindicated for use during pregnancy.

Spermicides can be used by breastfeeding women only after consulting a doctor.