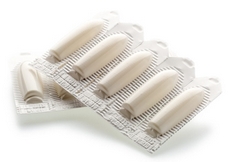 Nonoxynol-9 is a spermicidal suppository which is inserted into the vagina before sexual intercourse. When used correctly, the drug helps to prevent unwanted pregnancy.

Nonoxynol-9 spermicidal suppositories begin to melt at the body temperature and form a foam regardless of the amount of vaginal secretion.

The drug reduces the surface tension of the lipid membrane of spermatozoa and irreversibly paralyzes their ability to move.

The drug has a mechanical effect since the spermicidal substance, evenly distributed in the vagina, forms a stable barrier, which prevents the penetration of spermatozoa into the uterus.

The preparation has a preventive effect against sexually transmitted infections.

Before use, the suppository is removed from the blister and injected deep into the vagina before each sexual act. The drug becomes active after 10 minutes from the time of administration. During this time, the active substance Nonoxynol-9 is evenly distributed across the vagina and forms a stable barrier that prevents the passage of spermatozoa into the uterus. With prolonged sexual intercourse (more than 1 hour), another suppository should be inserted. Before each new intercourse, it is necessary to re-insert the suppository, even if the time interval between two sexual acts is less than 1 hour. The spermicide may be used for a long period of time.

Important: 2 hours before sexual intercourse and 2 hours after it you should not wash the vagina with soap or gel as this may change the vaginal environment and neutralize spermicides.

Nonoxynol-9 spermicide is not used in the following cases:

The drug is well tolerated by both partners. In rare cases, Nonoxynol-9 may cause side effects:

To avoid side effects, you should consult a specialist before using the vaginal suppositories.

The spermicide is practically not subjected to systemic absorption, so interaction with other drugs is unlikely. Because of the possible reduction in spermicidal effect, the suppository should not be used with other drugs intended for intravaginal administration.

Nonoxynol-9 suppository is a contraceptive and is not used during pregnancy. The effect of spermicide on pregnancy is not fully studied. Experiments have shown that the use of nonoxynol-9 in large doses causes significant changes in the fetal liver. Therefore, if pregnancy occurred at the time when you were using drugs with spermicides, there is a possibility of deviations in the child’s development.

The drug should not be used during postpartum discharge.

Potential risk os using the preparation during the breastfeeding period is not sufficiently studied. Lactating women use spermicidal suppositories in the case when the benefit to the mother exceeds the risk to the child.