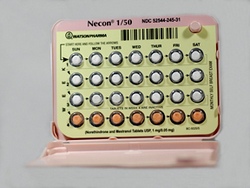 Necon 1 / 50 is a high dose birth control drug. It is manufactured to conduct preventive measures to become pregnant.

Necon 1 / 50 is prescribed as a contraceptive means.

The complementary mechanisms are involved to provide a contraceptive effect of this birth control. The most significant mechanism is the suppression of ovulation. Necon takes part in changes in the cervical secretion properties. Finally, it becomes almost impossible for sperm to enter the uterine cavity.

Women who take combined birth control drugs, the menstrual cycle becomes more regular. The painful sensations disappear, the intensity of periods decreases, resulting in a reduced risk of iron deficiency anemia. In addition, there is a proved evidence that the risk of endometrial and ovarian cancer is reduced.

Eacg Necon 1/50 package usually contains 28 tablets. Take 1 tablet daily for 28 days ina row. There is no interruption in the pills’ application. The drug should be taken at one and the same time washed down with a full glass of water. The latest pills contain no hormone. When taking these placebo pills the menstruation will start.

The package may also contain 21 tablets. In this case, the package contains no hormone-free tablets. Take 1 tablet daily for 21 days in row. Then don’t take any tablets for 7 days. You’ll get your period during the hormone-free week while you aren’t taking any active tablets.

Necon 1 / 50 is contraindicated in the following health conditions:

The interaction of oral contraceptives including Necon 1 / 50 with other drugs can result in breakthrough bleeding and/or a decrease in contraceptive effect.

Effect on hepatic metabolism: the application of drugs that induce hepatic microsomal enzymes can result in an increase in the sex hormones clearance. The following drugs are included in this list: phenytoin, primidone, barbiturates, carbamazepine, rifampicin; there are also suggestions for oxcarbazepine, topiramate, ritonavir and griseofulvin and remedies having St. John’s wort in composition.

When taking antibiotics (such as ampicillin and tetracycline) and for 7 days after their withdrawal, every woman should additionally apply a barrier method of contraception.

In case of missing the usual time of admission, the pill should be taken immediately. The delay from the usual application time less than 12 hours ensures a proper contraceptive effect. The effectiveness of the drug decreases when the pill is taken for more than 12 hours.

If more than 12 hours have passed from the usual time of taking the drug or if more than 1 tablet is skipped, then you should immediately resume taking the drug to avoid the premature menstrual bleeding. However, before the end of this cycle, you should use additional means of protection from pregnancy, such as a condom or vaginal contraceptive suppositories.

Necon 1/50 is not prescribed during pregnancy and lactation. If pregnancy is established while taking this birth control, the drug should be immediately discontinued. However, extensive epidemiological studies have not revealed any increased risk of developmental defects in children whose mothers were applied birth control pills in the early stages of pregnancy.

Taking combined oral contraceptives can reduce the amount of breast milk and change its composition, therefore, as a rule, their use is not recommended during lactation.