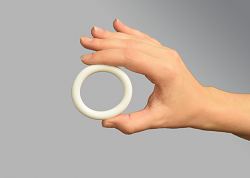 Hormonal contraceptive. Ethinyl Estradiol / Segesterone is mainly intended to protect against unwanted pregnancy. This vaginal ring is often prescribed by doctors for endometriosis. It can also treat uterine fibroids when its size is small requiring no surgical intervention.

This contraceptive ring refers to hormonal contraceptives. The contraceptive effect is provided by ethinyl estradiol and segesterone. Thanks to the use of this vaginal ring, the menstrual cycle is adjusted. Pain during menstruation becomes less noticeable, the volume of secretions decreases.

Also, the possibility of iron deficiency anemia is reduced. The main advantage of the hormone-based contraceptive ring is that its use prevents:

Ethinyl Estradiol / Segesterone is applied intravaginally. The ring is inserted into the vagina and left for 3 weeks to achieve a contraceptive effect. Then the ring is removed from the vagina and a break for 7 days is followed. It is necessary to apply an additional barrier method of contraception during the first 7 days of the usage of this vaginal ring. The ring may fall out if inserted incorrectly or when the vaginal pack is removed. In this case, rinse the ring with warm water and reinsert it.

Ethinyl Estradiol / Segesterone vaginal ring should not be used when there are:

Rarely and with caution, this vaginal ring is recommended in the following cases:

Antibiotics: A decrease in the effectiveness of oral contraceptives containing ethinyl estradiol has been observed with concomitant use of antibiotics such as ampicillin and tetracyclines. The mechanism of this effect has not been studied. In a study of pharmacokinetic interactions, ingestion of amoxicillin (875 mg, 2 times a day) or doxycycline (200 mg per day, and then 100 mg per day) for 10 days during the use of the vaginal ring had little effect on pharmacokinetics.

The use of this vaginal ring during pregnancy is contraindicated. In case of pregnancy, the ring should be removed. Extensive epidemiological studies did not reveal an increased risk of congenital malformations in children born to women who took COCs before pregnancy, as well as teratogenic effects in cases when women took COCs in early pregnancy, knowing about it.

The use of this vaginal birth control ring during breastfeeding is contraindicated. The drug composition can affect lactation, reduce the amount and change the composition of breast milk. Small amounts of contraceptive sex hormones and/or their metabolites may be excreted in milk, but evidence of their negative effects on children’s health has not been recorded.